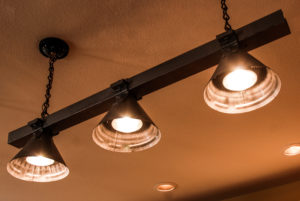 “I am an electric man and have talent in that regard.” Stephen McGehee

Native to Eureka Springs, Arkansas, Stephen McGehee grew up with art and creativity as part of his everyday life. He’s a licensed electrician with a passion for “giving off sparks.” He began his love affair with electricity early in life and has been plying his trade for nye on 40 years.

While expert at commercial installations, he especially enjoys creative kitchen and bathroom lighting. Stephen was mentored by Fayetteville Interior Designer, Michael Davis which allowed him opportunities to excel in the artistic elements of home lighting. By the 1990’s Stephen had developed a niche market in the Artistry of Electricity.