“Your intelligence and logic is a trap. Much was figured out before you were born.” Bob Patrick, Blacksmith/mentor

Even as a young boy, Stephen had an interest in blacksmithing. He read everything he could get his hands on. In the 90’s he bought his first piece of blacksmithing equipment – an anvil. He then got to business and designed a forge. Proudly he sent his plans to Blacksmith Bob Patrick whose critique did not deliver an endorsement of the plan. 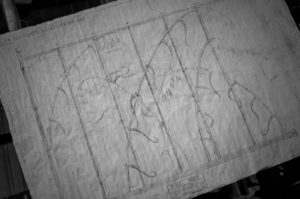 Bob Patrick constructed a real fire pot for Stephen. With the pot in place, Stephen “go to business” and built a forge around the pot.His first commissioned piece was a candelabra created for an Eureka Springs restaurant owner.

Each creation is a custom work of art. Carefully sketched drawings include each detail and component of the finished product. Plans are approved before the forge is fired and the hot metal touches the anvil. Many hours and strikes of the hammer are required to create the intricate details.